Atheist’s Guide to Christmas, The 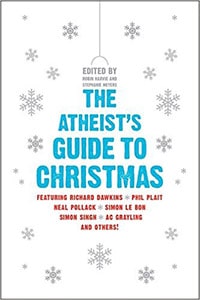 What’s an atheist to do? Assaulted from every direction by Christmas hubbub, it’s often hard for nonbelievers to feel welcome in the season of holly and all things merry.  But maybe there’s a solution for the lonely holiday atheist.  In the spirit of the late (and skeptical) Douglas Adams, forty-two comedians, scientists, philosophers and writers have come together to provide help in The Atheist’s Guide to Christmas.  Packed with all sorts of survival tips for anyone who finds the Christmas season a source of aggravation, it’s much more lighthearted and jolly than you might expect.

Featuring English writers from both sides of the Atlantic, this collection spans a wide array of topics from the Star of Bethlehem to atheist Barbie. Full of humor and carefree banter about Christmas present and past, it provides plenty of thoughtful commentary for atheists, agnostics or skeptics of any stripe.  Highlights include science writer Simon Singh on the Big Bang theory, country singer-songwriter Robbie Fulks on the origins of his song “God Isn’t Real” and journalist Paul Krassner on the Texas state constitution, which prohibits atheists from holding public office.

But the overriding theme that comes through in essay after essay is much more constructive than I anticipated. Many authors make a convincing argument that atheists have as much right to celebrate Christmas as anyone else; that rejoicing in some of humanity’s best qualities – compassion, generosity and humility – doesn’t require a belief in the supernatural.  Rather than inventing our own solstice holiday, maybe atheists should do what non-Christians do all over the world and feel free to revel in the aspects of the holiday that most appeal to them, be they Ebenezer Scrooge, George Bailey or a jolly overweight red-suited reindeer wrangler.

Whether the onset of the Christmas season fills you with joy or with dread – I freely confess to both emotions at various times – The Atheist’s Guide to Christmas provides plenty of entertaining advice and information that’s bound to make the holiday season more enjoyable.  Funny, personal and poignant, it’s ideal for the atheist on your list, be they mopey or cheery.