Astrophysics for People in a Hurry

The starman reveals all… 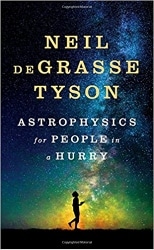 He was one of my childhood heroes.  The genius behind the popular 1980 PBS series Cosmos, Carl Sagan served up large platefuls of awe and inspiration during my awkward teen-age nerd years.  In the twenty years since his untimely death, no one has more successfully filled the man’s cosmically large shoes than Neil deGrasse Tyson.  Author of numerous books, creator of television shows and the director of the American Museum of Natural History’s Hayden Planetarium, Tyson may be America’s most well recognized scientist.  In a daring feat of science popularization, he attempts to explain the basics of the known – and unknown – universe in one small volume, entitled Astrophysics for People in a Hurry.  Even if you don’t know a neutron from a neutrino, it’s remarkably good reading. 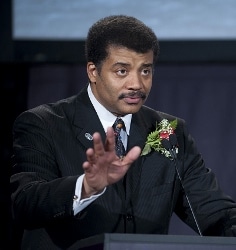 A collection of some of the author’s “Universe” essays in Natural History magazine – from 1997 to 2007 – the book presents much of what one needs to know to make sense of our remarkable universe.  From its origins in the Big Bang to its present circumstances some 14 billion years later, Tyson enthusiastically lays out the numerous steps in the evolution of the universe with clarity and wit.  Most impressively, he coherently explains why “dark matter” and “dark energy” most certainly exist and are more than ominously labeled imaginary concepts. 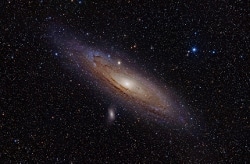 Although Tyson opens the book by pointing out that “the universe is under no obligation to make sense to you”, he goes a long way towards refuting this idea by providing remarkably clear and concise explanations of numerous interesting cosmological topics.  Even when he’s talking about dark matter and dark energy, he points out that scientists actually know quite a bit about these elusive substances.  Rather than treat them as an embarrassment, he posits that they belong on the continuum with the many other mysteries – some solved, some unsolved – that have presented themselves since Galileo first peered through a telescope.

Whether you’re a card-carrying science geek or just astro-curious, Astrophysics for People in a Hurry is sure to entertain.  Written by one of the greatest living science popularizers – undoubtedly the equal of acclaimed predecessors like Asimov, Clarke and Sagan – the book is a passionate, intriguing and engagingly successful achievement in cosmological concision.  Highly recommended.

Reviews of other books about outer space:  Black Hole Blues and Other Songs from Outer Space   /   Dark Matter and the Dinosaurs