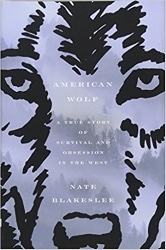 Great drama is irresistible.  Since the dawn of humanity people have been enthralled by great stories of interpersonal conflict and passion.  As strange as it seems, it may be this trait more than any other that we most closely share with the wolf.  Full of domination, submission, violence, love, loyalty and desire, the social life of wolves is amazingly complicated. Having been exterminated from Yellowstone National Park in 1926, it wasn’t until 1995 that gray wolves were reintroduced to the area from populations in Canada.  Since that time, the lives of various packs within the park have been documented in meticulous detail buy an informal cadre of dedicated observers.  Using this rich resource, journalist Nate Blakeslee has put together a narrative of wolf life as dramatic as any human story.  American Wolf is that true story.

Focusing on the O-Six – born in 2006 – a particularly charismatic alpha-female in the Lamar Valley of northeastern Yellowstone, Blakeslee tells a convoluted saga of violence and bravery, victory and defeat.   As she becomes increasingly famous among the enthusiastic wolf watchers, it becomes ever clearer that Blakeslee is setting the reader up for tragedy of a Shakespearean magnitude. 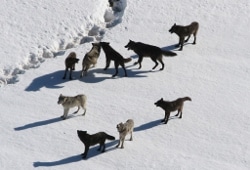 A pack of wolves messing around in Yellowstone National Park.

While it’s obvious that there have to be villains in any humans versus wolves story, if there’s a bipedal hero in this tale, it’s a park ranger named Rick McIntyre.   Devoting much of his life to the task, the man has logged decades of daily lupine observations.  A highly detailed depository of the Yellowstone wolves’ comings and goings, their births, deaths and departures, it’s this trove of information that Blakeslee skillfully fashions into a rivetig narrative.

Focused primarily on the lives of the wolves, the book also presents the story of the local human population and their interaction with the wolves.  While he’s clearly writing from a pro-wolf perspective, Blakeslee presents a balanced look at the lives of the local ranchers and hunters that have resisted the reintroduction effort from its inception.  His human skills must be equal to his writing skills as he somehow manages to befriend anti-wolf individuals who really have no interest in revealing their secrets, allowing them to tell their story and expose the weakness of their arguments entirely on their own.

Sure to stimulate passion in anyone who places a value on America’s threatened wild places and wild animals, American Wolf is a remarkably dramatic – yet entirely scientific – account of one heroic wolf and her extraordinary life.  Her compellingly told story provides just one more perspective on the concept of justice and integrity in modern America.  Highly recommended.