Alone on the Wall 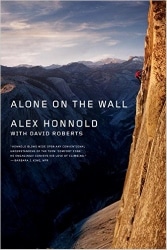 Words fail.  It’s categorically impossible for words to do justice to what Alex Honnold can do on a rock.  Michael Phelps can swim like a dolphin and Usain Bolt can run like a cheetah, but watching those exquisitely talented athletes perform doesn’t really engender the same feelings of disbelief that arise when watching a man climb thousands of feet up a vertical wall of rock with nothing more than his bare hands and some rubber soled shoes.   No ropes, no helmet, no metal spikes – just some chalk powder and a steadfast belief that gravity is optional.  Quite possibly the greatest free solo rock climber in the world, Honnold tells his astonishing story in Alone on the Wall.

As one all too conceivable mistake could lead to his immediate death, Honnold’s friends often have to look away.  It’s just too nerve wracking to watch him as he scampers up yet another wall.  I have complete sympathy for this reaction after watching some of his climbs on the YouTube.  Honnold’s gravity-defying feats challenge belief and are almost unwatchable – at least by this mild to moderate acrophobe.  While reading the book I had to repeatedly visit his Wikipedia page just to make sure the man is still alive.  To minimize the stress on his friends and to limit external pressures on himself, he often climbs alone, maybe informing a single trusted friend about his next solo climb in wilderness. 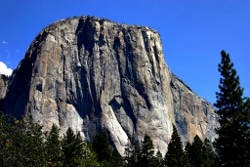 Traveling the globe, on his own and with groups of similarly motivated climbers, Honnold shares stories of his home base at Yosemite National Park, as well as vertical excursions in Mexico, Mali and Argentina.  His group adventures are often just as riveting as his solo work, as even greater feats of madness can be achieved when one’s accompanied by like-minded fanatics. 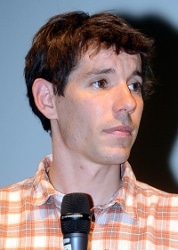 The climber/author in 2014. He looks so normal.

While Honnold’s most notorious for his solo work on rock, for this adventure on paper he’s accompanied by the acclaimed writer and veteran mountaineer David Roberts, with whom Honnold shares writing duties.  Roberts lends a voice of sanity at times and provides his own interesting perspective on the young climbing phenom.

While I’m not sure Honnold really understands how risky these adventures are, he does write about his approach to fear.  Maybe more than any other kind of sport, free climbing requires a mental focus that most mortals simply do not possess.  Somehow, despite all the variables thrown his way – from weather to loose rock to unexpected dead ends – the man doesn’t lose his shit.  He’s so completely in the zone that he often doesn’t seem to really remember some of the details of a climb after he’s back down to earth.

A riveting account of one man’s constant obsession with rocks and verticality, Alone on the Wall is great adventure writing.  It provides a consistently compelling look into what drives a man to repeatedly attempt the impossible and succeed.  Highly recommended.

Check out some other Readers Lane reviews of books about climbing:   Into the Silence   /   Denali’s Howl