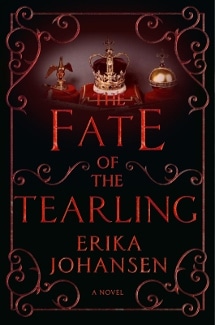 First things first.  If you haven’t read the first two books in this trilogy, don’t start here.  Go back and read The Queen of the Tearling

(my review is here) before even thinking about this, the final chapter – The Fate of the Tearling.  You won’t be sorry and it’s the only way you’ll be able to make any sense whatsoever of this installment.

With that out of the way, let’s get on with it!  The Fate of the Tearling picks up more or less where we left off – Kelsea, the Glynn Queen, has surrendered herself to the Mort army in hopes of making a deal with the Red Queen to save her kingdom.  That’s a scary proposition, since the Red Queen most likely wants her dead and the Mort army will most likely plunder her kingdom anyway.  But Kelsea has something the other woman wants desperately – the Tear sapphires and the power they hold.

Meanwhile, she has left her trusted advisor Lazarus in charge of the Tear Kingdom and all that entails, what with religion on the rampage from the Arvath, thousands of refugees to try and get back to their homes and a country to feed.  Not to mention a queen to save.

Kelsea finds herself captured, without her sapphires (thus her dangerous but indisputable power), and once again visiting the past.  This time her fugue states take her back to the early years after The Crossing, to the first seeds of discontent in William Tear’s utopia.

So what went wrong?  Who is the Red Queen, where does all the magic come from and how did something so good devolve into something so horrible?  You’ll find out in The Fate of the Tearling, and if you are a fan of the first two books, I don’t think you’ll be disappointed.

Erika Johansen has created a really wonderful, satisfying trilogy with the Tearling books.  Her initial premise of the dystopian future/medieval past/magical fantasy mash-up appeals to me on just about every level.  Her characters and setting aren’t as deep as you’ll find in the likes of Tolkien or Martin, but her prose is far less dense, making the books more readable, more escapist, less of a lifestyle and more of a diversion.   No disrespect for the uber-worlds of hard core fantasy, but sometimes you have other stuff you want to read, too.   The Tearling books sit right in the sweet spot that is the middle ground.

Once again, I’m impressed with her creation of strong women and thoughtful men.  Her protagonists continue to struggle with ethical dilemmas that have clear correlates in the real world and her antagonists are not soulless villains without history or regrets.  She does a decent job in humanizing nearly everyone without apologizing for their bad behavior (that goes for the good guys as well as the bad).  Her characters all make mistakes, they all feel remorse, they all struggle with indecision and temptation.

My favorite character across the three books is Lazarus.  He once again proves to be the glue that binds the story together, connecting the kingdom and the rescue attempts and Kelsea’s past with her present.  Kelsea can be frustrating, but Johansen keeps her true to her past incarnations.  She is still very young and though has great power, struggles to use it responsibly.  As a captive she must be resilient and thoughtful, a test she hasn’t had in a while.

I also really enjoyed getting to the bottom of how the Tear came to be – and how it came to diverge so greatly from its origins.  The fugues during which Kelsea inhabits the life of someone from the past could be an irritating gimmick, but for the most part it works for me.  Any fantasy world that allows for magic needs some suspension of disbelief and The Fate of the Tearling didn’t overindulge more than just a little.  Third installments are always a little hard because, well, you have to say goodbye to this world somehow, and doing that is tricky.

Overall, as a final trilogy installment The Fate of the Tearling delivers what it needs to deliver – it wraps up the storylines, doesn’t leave the reader hanging, and stays generally true to the characters as established in the first two books.  That there is a fair amount of social commentary is for me an added bonus.  I really enjoyed all three of these books and look forward to more from Johansen.