The Splendor of Graphic Humanity 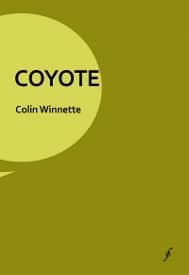 The first time I read Coyote by Colin Winnette, I was in a salon having my hair colored. The second time, I was tucked on the couch with my dog. If and when you read Coyote, I recommend the latter rather than the former, unless you like flipping through intense (and oftentimes grotesque) facial expressions at warp speed in public spaces.

I have never met Colin Winnette, but after randomly picking up and devouring his Spork Press book, Animal Collection, at AWP last year, I immediately gathered up everything else he’s had published. A cookie cutter author, Colin Winnette is not. His characters are always vivid and raw, but what draws me most to his work is the level of risk he’s willing to take in regard to formatting (if you’re a formatting nerd, Fondly is likely to rock your world, as it did mine).

Coyote is no exception when it comes to Winnette’s ace formatting. The book is small, yes, but Winnette’s pacing, paired with incredibly personal content, will have you gobbling the pages, baring your teeth, protecting these same teeth with your tongue, and pausing to take deep breaths before scurrying your way back to the lives unraveling on pages that seem too blue-hot with raw, immediate feeling to touch for long. Vignettes of fragmented memory lead us through the experience of a mother missing her daughter, and the way in which “her Dad” grieves in ways that are acceptable or not. The identities of those who remain matter only in relation to the girl who liked ketchup too much, who pet the cat against its fur, who sang songs they did not teach her, who went missing one day without any clues.

It is a simultaneously beautiful and horrible account, the prose sometimes slowing to allow for gorgeous imagery like a bee perched on the curving top part to the mother’s ear while she soaks and worries in the tub, masterful moments that allow the reader a moment above the surface before plunging back into the abyss of what was and what is.

If you like the feeling of your body as a carnival ride slows, the breathless tumble of what’s just occurred leaving you wide-eyed and ready for another go, Coyote — this little book that packs a powerful punch — is for you. I never read books twice.