Toni Morrison is able to weave a tale so intricate that it may take several readings before one can figure out what happened.

Morrison begins the mystery with the very first sentence: “They kill the white girl first.”

I momentarily stopped reading after that first sentence. After the initial shock wore off, I flipped back a few pages to make sure I was starting at the beginning and that I hadn’t missed the first chapter. 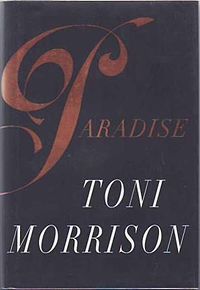 After finishing the book, I went back and re-read the first chapter. I was ashamed to say I didn’t know which character was murdered. The novel had brought these women into my life in intimate ways, yet I hadn’t a clue which of them were white and which of them were not white. This bothered me, for I feared that I had not given the book the attention it deserved, that I had missed something. Yet, the more I re-read the book, the less I was sure about the details.

I was comforted a little when I read an analysis of the book where it said, “These women (the ones in the convent) are not ‘color coded,” as Morrison puts it, and the reader has no way of knowing their race. It is a bold literary device: In struggling to figure out which of the women is white, the reader is forced to ask why that detail even matters-except to figure out who was killed first.

As much as I hate reducing a book like this to a plot summary, I feel I have to tell you something about what happens so that this analysis will make sense. This book begins with a posse of men from Ruby raiding a convent where a group of world-worn women are living. Ruby is an isolated town in Oklahoma. It is where several families have built a home free from the rejection, violence, and prejudice.

Even in Ruby, though, things cannot stay the same. When the dream seem to be spoiling and tragedies begin to impinge on their self-made Paradise, the founding fathers look outward for a cause and find it in the women of the Convent. The Convent was once an orphanage run by Roman Catholic nuns. All the sisters have left by the time the book begins. Living there now are women of varying ages who have experienced various hurts, abuses, and losses.

Paradise is the story of people who are traumatized by life. Nearly all of the characters are left with deep psychic injuries that prevent hem from trusting or from being tolerant. And this is true of the women of the Convent and the people of Ruby. Indeed the women of the Convent and men of Ruby are more alike than any of them would willingly admit. Their stories are almost parallel. They are ones of rejection, stamina, running away, and isolation. They are ones of starting new and surviving only by keeping other people out.

There were a lot of characters in the novel and it was sometimes hard to keep them straight. Morrison introduces us to the residents of an entire town, their ancestors, and their tormentors. We meet the women of the convent, their former families and all who had abused or helped them in the past.

Another thing making it difficult to keep track of characters is their similarity. There are many parallels between many of the characters–a stark reminder that we have more in common with each other than we allow.

Morrison has a Faulkner-like obsession with bloodlines in this book. Some of the book’s tragedies occur because of the resistance her characters have to mixing racial bloodlines. The rejection that some of the characters experienced came from others of their same race–but from those having a different shade of color. These same characters then continue the rejection of those who are shaded differently from themselves.

One of the more interesting characters is the young minister, Rev. Meisner. He is an outsider–even after years of living in Haven. He has been part of the race movements of the 60s and is amazed at Haven’s indifference to it. Integration holds no attraction for this community, nor do they feel any obligation to other members of their race. Meisner’s preaching falls on deaf ears, yet he remains persistent.

Point A to Point D to Point B

I’ll confess a fondness for books that move about in time. Catch-22 is one of my all-time favorite novels. When done well, non-linear books force me to pay greater attention and to question what is revealed the first time around. Morrison moves through time extremely well.

If, however, you want a story that moves from point A to point B, without sidetracking to point D or Z, you may grow frustrated with this book. Morrison herself said: “People’s anticipation now more than ever for linear, chronological stories is intense because that’s the way narrative is revealed in TV and movies,” she says. “But we experience life as the present moment, the anticipation of the future, and a lot of slices of the past.”

Morrison begins at the end. The first chapter takes place after nearly all the rest of the novel. It is a device that never allows you to fully trust anyone in the novel. Just when you think someone might be respectable, admirable, you remember that he is a murderer or that she might be a pervert responsible for many tragedies. But you don’t know for certain, and won’t until you’ve closed the cover on the final page.

Paradise is a novel with goals. It is not written for the mere purpose of entertainment. Morrison is forcing us to think, to examine issues, to explore the way we behave. I find it difficult to say that this book is about a single topic, though some of the critics have said it is a book that is about religion. Personally, I thought the religion was secondary to the themes of rejection and isolation. However, Morrison herself said she wrote this book as an exploration of how religion affects people and how love of religion makes different people act.

Paradise is an eloquent treastise on how intolerance breeds intolerance. Those who have been wronged are more likely to do the same wrong to others. It is almost a twist on the Golden Rule, “You will do to others as others have done to you.”

Paradise certainly begs the question that Morrison herself asks during interviews, ‘why must talk of any paradise necessitate exclusion?’

No, I’m not going to give you any spoilers. Rather, I’ll say that I found the ending confusing. It took me several reads and I’m still not certain I understand what happened to all the characters. I certainly don’t understand how it happened. This book is not an easy read or something to take to the beach. It is a book requiring careful thought, analysis, and reflection.

I believe Morrison intentionally left the ending vague. There seemed to be a mystic significance to the ending, but it bypassed me. Or perhaps it is just that I want a sharper focus of Paradise than Toni Morrison feels is necessary to paint.