If you laugh at farters or if you think spitting watermelon seeds in the yard and counting the ones that stick to your friends means a big time, then this is your kind of poem book. Actually, if you say poy-im rather than po-um, then you probably shouldn’t drink chocolate milk and read this book at the same time. 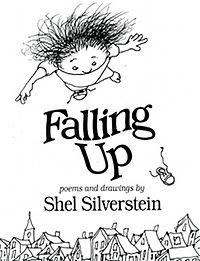 First, I should tell you that this is my favorite poy-im book. Yes. I did read the classics in college. And I yes I did pass my classes. I still don’t see why we had to read that poem about the flowers in the field though I kind of liked Poe and his freaky cloud piece.

Second, I should probably tell you that Shel Silverstein is pretty “out there” by today’s standards. I could see him being a huge sensation back when the Grimms wrote (the original versions and not the watered down rhymes we usually teach the kids) and when the kids cooked the old witch lady in the oven in Hansel and Gretel. If you think we have some violence on TV now, then you might want to check out some of the really old kid books. Shudder city.

Silverstein’s old works include poem collections (Where the Sidewalk Ends and A Light in the Attic) and The Giving Tree (a kinda sad book about a tree friend). I like all his stuff, but this is my favorite. My boys “thumbs down” The Giving Tree but like the other poem books OK. They also favor Falling Up (written about 10 years after the others). Why? Heck, I don’t know. There is just no accounting for taste (or lack of it I guess).

If you are real politically correct, then you can just pass Falling Up by. You may not appreciate the flowers that “could be poison ivy . . . They might be poison oak.” Then there is the Out of Paint piece where the kids just squish the food and make colors. The one about peeing on the flowers is probably not in really good taste. And Silverstein does use words like butt and dummy in this book. I guess it’s hard to rhyme some things.

All I can tell you is that the poems really are funny in Falling Up. Here is one that I think should be required reading:

I made myself a snowball
As perfect as could be.
I thought I’d keep it as a pet
And let it sleep with me.
I made it some pajamas
And a pillow for its head.
Then last night it ran away,
But First — it wet my bed.

This will give you a general idea about what to expect. Silverstein is on-the-edge with his poems for kids. He was known for being unconventional before he died in recent years. I think his wild streak appealed to kids today who are so sheltered in some ways and then exposed to so very much in others. This is a safe way to explore some of those no-no topics and to see that most of us do have some less than perfect experiences. In fact, I use this book to discuss issues with my boys and to point out some words that might not work in “polite” company like in front on the teacher.

A sample lesson would be . . . Yes. We can pee outside in the woods. It is too far to walk back to Grandma’s house to use the bathroom. We probably do not want to do this in town though as there are too many cars going up and down the street. Trees are not wide enough to hide nakedness as a rule.

The age rating on the book is 9-12, but I think it works from about 6 or 7 years and then up. It really depends on whether your kid has developed a sense of humor. Caleb had to learn a joke for homework in kindergarten, and that was hard. He finally told a knock-knock I told him, but he never did get it.

Caleb was asking what was funny about that and why the crying punch line. I explained several times and then finally told him to just tell his teacher that knock-knock which was getting less funny every time we had to practice. I really could not think up any clean jokes to tell him. Most I heard working sheet metal, and I sure wasn’t telling him those.

That was when I started to look for some humor books. It looked like we needed to work on humor if he was going to have to tell his teacher jokes. I am still not sure why kids needed to tell jokes in K class. Maybe the teacher was bored? All I really know is that I am getting a real education now that my kids are in school.

First, I did not look at poetry books. Those were not my top picks growing up. Then this one caught my eye. I was laughing at the store, so I bought it. Caleb even understood Snowball and some of the other joke poems. There were a few I skipped at K age, but most were fine and really made him laugh.

I think this humor is really good for concrete thinkers. I never did cotton up to Seuss as a kid and my boys were not that keen on that either. What is a two wump hump anyway? And what is funny about that? This kind of humor (Silverstein) is slapstick in that you can picture the things happening. Think about the farts and watermelon seeds I mentioned. You can (hopefully) mentally see the humor rather than taste the humor like in Seuss books. If you didn’t laugh about the snowball, then I would talk myself blue faced trying to explain why this is funny (and you probably would hate it).

I am sure this is not the poem book for all kids, but I can tell you that it cracks us up around here. We also like to watch the neighbors race the lawnmowers while inebriated and rolled in the floor when Eli washed the plate glass windows with Aim toothpaste. That’s just us I guess.

Bottom line? It’s your call. It’s a favorite around here, but it might be a naughty for some families. You can always check it out at the library if you’re not sure.