All Over But the Shoutin’

The Other Side of the Poverty Line 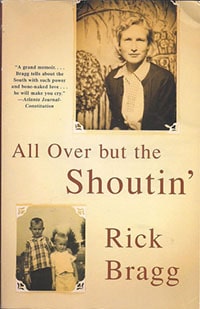 If you really want a glimpse across the poverty line, then pick up Rick Bragg’s All Over But the Shoutin’

. This is one of the few books to come out of the “poor white trash” community, and it is raw, honest, and full of beautiful anecdotes, descriptions, and human feelings.

Though many books have been written and printed from the socially deprived black community standpoint, “white poverty” tends to be pushed to the back stove eye and basically considered to be a oxymoronic combination of words (white and poor). Now, certainly the black community is hit hardest with poverty in the U.S. in terms of percentages, but the raw numbers with a dominant white population group (close to 80 percent) put persons-of-non-color at the top of the welfare rolls as far as overall dependence on the system. I have a hard time convincing my students that the average welfare mom is white, but that is how it goes.

Since I come from a mountain background (similar to the Alabama world described by Bragg), I can say that I feel comfortable with Bragg telling this story and feel that he did a good and fair job. He’s one heck of a writer. He won the Pulitzer with a story about a black woman who gave all her savings for college scholarships. The amount was huge. She just worked and worked and put that money back, and she didn’t feel that she needed extras. She turned on the air conditioning when Bragg came to do the interview (but usually didn’t use that), and I can relate to that kind of thinking. That’s just how it is in the South if you don’t have a lot of money or if you grew up in a household where you were expected not to waste. Bragg captured this woman’s life as a proud black female who never had a lot and just flat didn’t need a lot to feel OK.

One thing mentioned in the book that relates to this story is how a black family “down the road” helped out the Bragg family when they didn’t have food. That would be the major embarrassment for a white family in the area, but when you’re hungry, food is good. I think Bragg mentioned that, because he did see and realize that it doesn’t matter what color you might be. A black momma helped out when his mom needed food for the kids. Those kinds of things do stick with a kid. My students in class (required to read this book) also said that they didn’t think that Bragg was a bigot though his background included those thoughts and messages. He was simply up front with the things said and done and did not make editorial comments on the race issues in the south.

I think that Bragg kind of has a soft spot for women in general, though he did cover the Susan Smith murders (where she ran her car with her babies into a lake and killed them). He dedicates All Over But the Shoutin’ to his mom and says that it is not an important book, though it is, and he probably did know that. When a dirt-poor momma who doesn’t have a new dress for decades raises a kid who wins the Pulitzer, it is big time. Bragg didn’t have to explain where he came from and how his mom shaped him, but he did. That’s what this book is all about. He really gives voice to all people who don’t have the same advantages that seem to be the norm in mainstream America.

Momma Bragg married a fast-talking man who was cute and she had three boys. Now, that happens to a lot of women in this country. She worked her entire life and tried to make sure that all the boys had clothes and food on the table — plus love. Her older two boys ended up in jail and one dead, but Rick pretty much changed the family tradition by being a success in world terms. He couldn’t marry up and settle down, but he didn’t land in jail or on the bullet end of a gun. He found a woman. It didn’t work out. He went back to his first love — writing.

Bragg’s dad walked in and out over all the years. He was a hard-drinking and hard-fighting man — not unlike many men from the poor side of town. If you don’t kick butt, then you are just dead (or you sure don’t get a woman). A little (or a lot) of love coupled with the macho thing does go a long way in a family, and Daddy Bragg seemed incapable of delivering that. He did try to patch up at the end of his life, but it was really too little and too late though Rick seemed to appreciate the gesture of books and a gun on some level. The dad only reached out to Rick and not the mom and other sons. The older ones probably figured that it was way too late.

Rick recalled his dad’s fights (as he also notes that he tried to explain). “He had been a fearsome man, the kind of slim and lethal Southern man who would react with murderous fury when insulted, attacking with a knife or a pine knot or his bare hands. When I was six I watched him kick the mortal hell out of a man in a parking lot. I cannot remember why he did it. I just remember how the man covered up his head and tried to crawl under a car to get away, but he was too fat and wedged himself half in and half out, while my daddy kicked his ass and spit on his back and called him a son of a bitch.” Now, that’s pretty much how this book reads and how Bragg tells his story. He really does not pretty this up, and he does not make excuses.

You have to wonder how Bragg came out of this background and made it big time in the newspaper business, but you also can see where he got his drive and his doggedness. He was not always comfortable in the high-class circles and especially in New York on publisher’s row, but he could hold his own with his pen to back him up. Making magic with words can take you places you would never think you might go. He might go a little hard on northerners who take themselves too seriously, but he does make a point about some of the black tie things that really are neither here nor there.

I won’t leave you thinking that Bragg lived out a fairy tale. He doesn’t present himself that way, and I won’t either. He had problems with relationships and in making a marriage go. Now, that is not that unusual in the world today, but certainly Bragg did not have great role models on how a partnership might operate. He’s a cute guy, but I would think that he would be hard to live with. He’s got some of the male dominant attitude even if he loves his mom, and he isn’t one to share the spotlight. He worked hard for his piece of the pie, and he intends to enjoy it. He might find that it would be better spread around with a family, but that doesn’t seem to be in the cards.

This is one of the all-time best books I’ve read and especially coming from an author out of the south and from a poor background. While it may not ring true with some readers, those would be readers from other areas of the country. It might be hard to picture the things that Bragg talks about, but I could feel every word of this book. If you are southern and particularly from the lower side of the poverty line, then I would say that you really need to read this book and celebrate the expression of a culture that has long been silent. If we don’t give “voice” to all, then we don’t really grow as a country. Even if you can’t imagine this lifestyle, read the book and consider that some people in the U.S. have a life very different from the TV world that we are sold on Time-Warner. It would be nice to think that poverty is just not having the latest Nike tennis shoes, but it does go much deeper and it cuts across all color lines.

One of my favorite quotes comes from Jessie Jackson. I can’t remember the exact wording, but he said that it doesn’t really matter what color your skin is when they turn out the lights. You can’t see in the dark when the power company cuts you off for non-payment. That has always stuck with me (and I’m glad that my family could always pay that bill), and I think that Rick Bragg captures that thought for a group that has long been seen as exempt from the hardships of living poor. Rick got out of the black hole, but his brothers did not, and a lot of other people don’t. While some people may see this as a character thing, it really does have a heck of a lot to do with where you were born and the tools you get from the get-go. Did Rick’s momma and brothers deserve a bad lot in lot? Well, read the book and decide.

If you enjoy All Over but the Shoutin’, Bragg also wrote Ava’s Man

, which is the story before his own story. He interviews relatives and picks up with his family line in the previous generation. Ava’s Man is really great too, but I think All Over is better. Rick captures things that he sees better than things that he simply hears from the family.