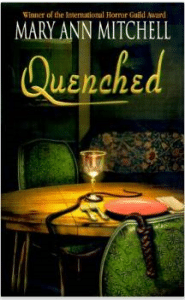 In a World of Bad Horror Books, Quenched is the #1 Stinker

A few months ago, I discovered book lots on ebay; figuring this would be a good way to get loads of books cheap and discover new authors, I started out as I meant to go on with a mystery lot of 70 horror books. When said mystery lot arrived, I avidly read the blurbs of the novels with most enticing covers (or corny titles). Loads of goodies from the 80s were in there, and my first few experiments were positive, entrancing me with scintillatingly dark worlds and new authors whose novels were soon populating my mailbox and probably causing my postman back problems. Soon, Mary Ann Mitchell’s novel, Quenched, detailing the exploits of a vampiric Marque de Sade drew my interest and without knowing anything about either the novel or the author, I plunged in with that ignorance-is-bliss book lover’s gleam. Mostly, I just liked that raised sort of bevel on the cover. I can own up to that.

Some things never do change, and while summer showers pattered outside my bedroom window as I flipped to the last page in Quenched, I could still say with confidence that ignorance is my final state. In other words, I have no idea what the book was about. Not even the slightest idea. There were promises of sex, and vampires, and horror, and, you know, cool cover art – all the supposedly good stuff. Unfortunately, the back cover blurb must have been about another book (rapid cut and paste can get you into so much trouble.) As someone who has been known to demolish a five hundred page book within a few days, you can imagine my chagrin when after several months this novel just kept sitting by my bed, mocking me. I wouldn’t be defeated. I’d force myself to finish . . . eventually . . . after reminding myself that there are good books out there.

Ok, so what did the back cover blurb say, you ask? Ostensibly, two new vampires have been created and are roaming some sort of steamy/kinky sex clubs attempting to get vengeance on the Marquis de Sade, their creator and the villain of the piece. What the back cover doesn’t tell you that Google apparently does is that this is a series (perish the thought). Reading the book wouldn’t hint at this, and only after some research did I realize that this novel is apparently picking up from some utter travesty called Sips of Blood. Maybe this explains all the references to supposedly important events that . . . I guess are important to these random people?

The story (I use the term loosely, because I’m too lazy to get a thesaurus and look up synonyms for “shit that wastes my time”) follows Wil and Keith, newly made vampires created in some nebulous tragedy. I don’t care enough to Google what happened in the first book. Keith, Wil’s vitriolic father, in the process of becoming a vampire, lost the use of his legs. He thinks Sade (a mostly absentee figure) can cure him and make him a true child of the night (insert CGI bat here – complete with squeaks). Wil hates Sade and his father too (I admit here, the feeling is mutual), yet dithers constantly. The two bicker. They will go to Sade, they won’t, they will, they won’t. Anyone going to start pulling the petals off a daisy to settle this dispute?

Meanwhile, one of Sade’s younger female vampires wants to get pregnant (a supposed impossibility) and give birth to Lillian, a vampire killed previously (first book?). Sade is against the idea, and quotes an awful lot of other books (you know – real books) in French. Then the chapter tries to find a way to get him to say these quotes so we can be all impressed, because it’s French.

The characters live in a slum, in a crummy building. They might get caught, probably because they have the habit of killing neighbors and visitors in public. Fortunately for them, the novel has such bored supporting characters, that they simply pine for death and leave the hapless vampires to their reign of insipid bloodshed.

Occasionally, as though some omniscient narrator had a vision of the mistaken cover blurb, the characters briefly throw in a few minutes of “down and dirty talk.” It’s good for a laugh, but forgotten quickly and the strange thrust of libido that jumps out, begging for attention (because, you know, Marquis de Sade) subsides back into a vampire bicker fest and a dysfunctional father son relationship. There is also some (ok, heaps) of bad writing piled on bad grammar with French (in fancy italics – oooo, impressive). As if the lack of plot and characterization wasn’t enough, the humorous attempt at amateur horror is . . . well, actually it’s so bad that it isn’t even good as a joke. It’s just bad folks.

Oh yeah, I think I tend to talk about endings here (my last coffee was hours ago, I’m winging this folks) someone gets mad at someone, there is a flurry of very nearly having things actually happen in the plot, and then the novel, mercifully, mercifully, finally ends. A new story sort of starts at the end of the novel, as though it were a different novel (under the narration of a different character), but soon the writing exhausts itself and meanders into an ending which is so abrupt that when readers turn the page we jump in shock (really, truly, is the torment over! Is it over!)

I like to donate books I’ve read, either to the nursing home or the book section at work. It keeps my space open (for more books) and passes on stories to fellow bookworms. But . . . but, I just don’t think that I can hoist this on some other, innocent, unsuspecting reader. What if they go off reading completely? What if this is their first book experience? What if another psychological scar or deep disappointment in life is enough to put them over that edge? What has anyone ever done to me to deserve the sharing of such a story – other than maybe that dude at work who snatched my cherry soda out of the fridge . . . hmmmm.

In case you missed the sarcasm, not recommended. Negative star ratings. Run, do not walk!