Castle of Otranto, The 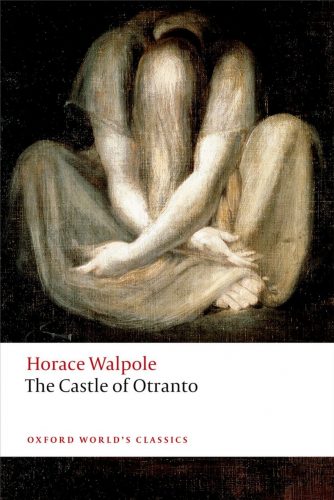 My daughter told me one day that she was making a chronological list of all the horror movies ever made.  Yep, I thought, that sounds exactly like something she would do.  Because it’s something I would do, and I kicked myself for not having thought of it first.  But she wasn’t making a list of horror novels…

I haven’t either, although if that information were easier to find online, I absolutely would.  What I was able to find, though, was what is considered to be the first horror novel.  Or at least the first GOTHIC novel, which was close enough, I figured.

Horace Walpole’s THE CASTLE OF OTRANTO was written in 1764 and tells the story of Manfred and his clan.  The novel opens on the wedding day of Manfred’s only son Conrad, about to be married to Isabella.  However, just before the wedding can begin, Conrad is killed when a giant helmet falls on top of him and crushes him.

Manfred decides that he will marry Isabella instead and plans to divorce his current wife Hippolita.  When he presents his plan to Isabella, she flees his presence and disappears into the bowels of the castle where she is saved by a stranger who impedes Manfred’s search while Isabella escapes.

Hijinks ensue and the stranger, Theodore, is taken prisoner and is supposed to be executed, but is saved at the last minute by the local friar, Jerome, when he discovers Theodore to be his own long-lost son.  He begs Manfred to spare his life and Manfred agrees, but only if Jerome tells Manfred where Isabella is—Isabella sought refuge in the church.  Meanwhile, an armor-clad knight is also seeking Isabella, but when Theodore fights and wounds the knight, the knight is revealed to be Isabella’s father, Frederic.

Frederic is coming to lay claim to the castle as its rightful heir, as Manfred’s hold on the title is tenuous at best, but he agrees to a pact with Manfred in which they will wed each other’s daughter.  Theodore, however, already has his sights on Manfred’s daughter, Matilda.  But Manfred thinks Theodore wants Isabella and plans to kill him.

Mistaking one for the other, Manfred accidentally stabs Matilda, causing Manfred and Hippolita both to give up their titles and retreat to a life of religion, leaving Theodore the true heir to the castle of Otranto.

Now, let’s see.  I read this novel under the pretense it was a “gothic horror novel”, since I only found it by seeking the “first horror novel ever published.”  And while THE CASTLE OF OTRANTO has some slight horror elements (gigantic ghostly figures, talking skeletons, paintings that walk around by themselves), the main vibe from this novel was satire, especially in the several scenes Walpole writes conversations that could easily have been the precursor to the Abbott and Costello Who’s On First bit.

“What is in the great chamber?”

“Were all the pictures in their places?” said Manfred.

“Yes, my Lord,” answered Jaquez; “but we did not think of looking behind them.”

“When we came to the door of the great chamber,” continued Jaquez, “we found it shut.”

“And could not you open it?” said Manfred.

“Oh! Yes, my Lord; would to Heaven we had not!” replied he—“nay, it was not I neither; it was Diego: he was grown foolhardy, and would go on, though I advised him not—if ever I open a door that is shut again—”

“Trifle not,” said Manfred, shuddered, “but tell me what you saw in the great chamber on opening the door.”

“Jaquez,” said Manfred, in a solemn tone of voice; “tell me; I adjure thee by the souls of my ancestors, what was it thou sawest? What was it though heardest?”

“It was Diego saw it, my Lord, it was not I,” replied Jaquez; “I only heard the noise…”

And while this exchange is cute and entertaining, at this point early in the novel, I’m still looking for the horror.  I was hopeful at first, since the novel starts with Conrad being crushed when a giant helmet falls from the sky, and later there is a giant sword, and what Diego and Jaquez saw—or rather what Diego saw and Jaquez only heard—was a giant leg stretched out in the great chamber, then moving to stand up, but eventually the novel just becomes a scavenger hunt for Isabella as Manfred tries to convince everyone around him that he should divorce his wife and marry the younger woman instead.

There’s some information about an old prophesy that says “that the castle and lordship of Otranto should pass from the present family, whenever the real owner should be grown too large to inhabit it”, but honestly I don’t remember the specifics of the prophesy ever being mentioned in the text, and only later read it in full online.

I’m still not entirely sure what to think of THE CASTLE OF OTRANTO.  It was a very short read—only 124 pages in the edition I read—but it is from 1764, so the prose demands attention and concentration; you’re not gonna breeze through a book like this, and if you try, you will miss half the plot points and details.

One thing it has shown me is that the THREE’S COMPANY model of storytelling has been in effect for centuries (Shakespeare mastered it LONG before Walpole), where misunderstandings and mistaken identity are the primary ingredients and everything hinges on coincidence.

Does that make it bad?  No, when I was a kid, THREE’S COMPANY was one of my favorite shows, and there’s a reason the model has worked for so long.  But still, I just can’t see this one as a horror novel, which is what I went into it expecting.  And maybe it was never intended to BE a horror novel, despite the weird supernatural elements that never get resolved.  Maybe I saw “gothic” and assumed it was a horror novel.

Whatever the truth of the matter, still, I have read this very very old novel and lived to tell about it.  Now if anyone out there knows the REAL first HORROR novel ever published, I’m all ears.

The Me You Love in the Dark ~ All of the Marvels ~ Spider-Man/Doctor Octopus: Year One