All of the Marvels 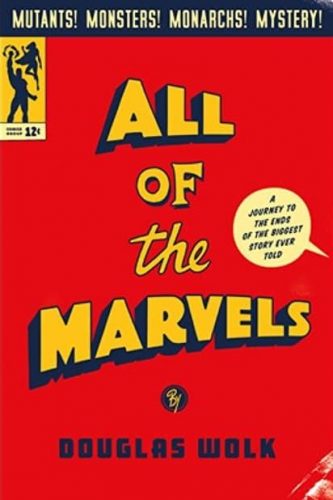 “Well, not ALL of the Marvels. But definitely some of them”

As a self-professed Marvel Zombie, obviously I’ve taken to the MCU movies in a big bad way. What I’ve loved most about them is the continuing story, the long arc, the emotional journey viewers are taken on, where a dropped line in the first Iron Man movie can become one of the many places I got choked up at in Endgame. I love the evolution.

I started collecting Marvel Comics in late 1987, over 25 years after the official “start” of the Marvel 616 Universe—the standard comic universe where we meet the Fantastic Four, the Avengers, the X-Men, and Spider-Man, all the way back to FF #1 in 1961.

Having seen that journey through the eyes of the MCU, I was curious what it looked like on a much grander scale via the comics. Luckily, Marvel Unlimited, the Marvel Comics streaming app, lets you sort their catalog—which contains MOST of the Marvel books ever published—by order of publication date meaning, if you wanted, you COULD read the history and development of the Marvel Universe from that very impressive beginning on through to the current day.

Now, we’re talking tens of thousands of comics, so while you COULD, who’s got that kind of time?

Having finished it, however, I have to say this was not the book I expected it to be.

Wolk says in the beginning that this task comprised over 27,000 comics, spanning the first, Fantastic Four #1 in 1961, all the way up to then-current Legacy #1 in 2017. So I went in expecting this book was going to be an overview of the Marvel Universe from FF #1 to, you know, Legacy #1.

Instead, he breaks up his narrative into sections, each section—chapter—covering a different area of the Marvel Universe, but at 367 pages including the index, he still misses big chunks.

There’s a chapter on the Fantastic Four, naturally, and one on Spider-Man, the X-Men, the Avengers, and one on Black Panther. Most of the big bases are covered, and a few of the not so important ones, like Ms. Marvel, as well as an interlude about Dazzler of all characters, plus monsters, the Vietnam years, the Lee/Kirby/Ditko creative powerhouse, and a few others.

What’s not included is a chronological overview of the entire history of the Marvel Universe, which was exactly what I was hoping to find in ALL OF THE MARVELS.

Remember those 27,000 comics he said he read? He talks about 190 of them. That is such an infinitesimal percent!

Don’t get me wrong, what he has to say is always interesting and I wanted to keep going back for more, but 190 books??? Marvel puts out more books than that in 4 months, and he’s talking about a 56-year span.

Instead, ALL OF THE MARVELS hits highlights from different eras, starting with Fantastic Four #51, which he calls “a sentimental favorite for a lot of long-time comics readers.” Keep in mind, this is where he’s STARTING. Not at FF #1, which would be the logical place. In fact, FF #1 is the 7th book he highlights, after FF #51, FF Annual #3, FF Annual #6, FF #116, FF #271, and Power Pack #16 of all things. THEN he circles back to FF #1, where he points out, “Some new readers’ impulse to begin exploring Marvel’s comics with the Fantastic Four’s origin story, the first Kirby and Lee superhero comic book, is understandably strong. I encourage you to do so if and only if you somehow find yourself in the fall of 1961, ten years old, standing at a newsstand with a dime in your hand. Otherwise, it’s much more enjoyable for a contemporary reader after you’ve got a sense of where its creators were going and where they’d been.”

I disagree. I’ve started with FF #1 and read the entire first two years of Fantastic Four in order of publication, and I think it reads just fine.

Wolk does give a good and somewhat thorough overview of the OVERALL Marvel Universe history, but admittedly misses some details. (He’s not a fan of The Punisher, doesn’t touch on Speedball at all, and Speedball’s former teammates the New Warriors only get one brief mention. And where is Elektra? Nowhere, even though Daredevil gets decent coverage.) Yeah, I know some of these details aren’t huge when looking at 56 years of history, but can you call something “a journey to the ends of the biggest story ever told” when you skip HUGE CHUNKS of the story and don’t even tell it in the order it happened?

He says in the final chapter—my favorite chapter—that he and his son bonded over the history of the Marvel Universe, but his son wanted to read the stories in chronological order, not publication order. Yes, I’ve done that too, but as such a long-time reader and someone who has read countless parts of this “biggest story ever told” way out of order, I’m not sure it had the impact on me it would have on someone who wasn’t already familiar with Thor, Loki, Wolverine, Doctor Strange, etc, from their pre-FF #1 days. Neither here nor there. My point was he and his son read the books in the order they happened for the characters. I would have even been happy with THAT, but that’s still not what we get here.

I know this is all sounding like I didn’t like ALL OF THE MARVELS, but I did, I REALLY did. I looked forward every day to the next chapter. It just wasn’t the book I thought it would be, and yes, once I realized that, I also realized the book I expected to be reading would have been several thousand pages long, but still.

My point here is not to tell you this book sucked. The opposite: it was a great book and a very informative read. I’m just saying, if you’ve been considering this book thinking that his quest to read ALL the Marvel Comics resulted in a book where he talks about “the longest continuous, self-contained work of fiction ever created”, ALL OF THE MARVELS is NOT that book.