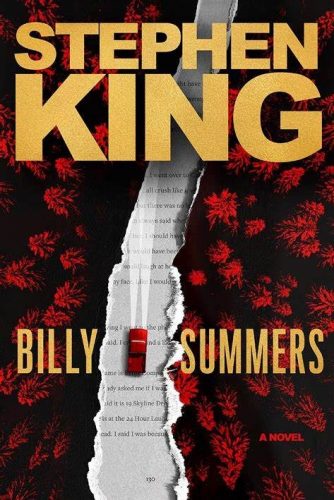 I know I’m not supposed to judge a book by its cover, but I have to admit I do.  All the time.  Even when it’s a Stephen King book and I KNOW I’m going to buy it and read it and, most likely, enjoy it.  I still will look at the cover first and form an opinion of the book as a whole.  I did that with his 2021 book BILLY SUMMERS, and I was totally 100% wrong.

In this particular case, a terrible cover did not make for a terrible book.

But make no mistake, that’s one UGLY cover.  Holy crap.  WOW, that’s a cover only a mother could love.

Back to the book.

BILLY SUMMERS, at first glance—well, second glance, once I got past that cover!—is a story I felt I was going to yawn all the way through.  Hitman on ONE LAST JOB before he retires, THE BIG SCORE to send him off into his golden years, but SOMETHING GOES WRONG.

But see, what I was forgetting was, this is Stephen frickin’ King, and even when his books are terrible, his writing is NOT.  He’s been publishing novels for FORTY-SEVEN years, and publishing fiction in general for longer than that.  The man knows his way around some prose.

And boy does he ever.

BILLY SUMMERS is the kind of novel that, as a writer myself, baffles me with just how easy he makes it seems.  Billy is hired to kill a “bad man”, the only kind of job he ever takes.  King wants us to know upfront that Billy may be a killer, but he only kills people who deserve it.  Never mind the host of moral quandaries that brings up, the least of which is “bad” by whose standards.  We go with it because, well, it’s a King book and it’s 514 pages and, okay, let’s just keep going and see where he takes us.

But this isn’t just some normal “man is hired to shoot target, man shoots target, man gets paid” story.  The target is currently in jail in California, half the country away, but he’s coming back to Red Bluff (where exactly Red Bluff is, King never specifies, just some “red state just below the Mason-Dixon line, east of the Mississippi”).  When is the target, Joel Allen, coming?

Could be up to a few months.  Whenever the extradition order can be carried out.  What’s Billy gonna do during that time?  Establish his cover story.  The mob guys who hire Billy set him up as a man named David Lockridge, a writer with a chance at a big contract, but first he has to finish his book.  So his publishers have set him up in a small house in a nice neighborhood with an office in downtown Red Bluff, high in a towering office building overlooking the courthouse.  Because, yeah, that’s how that works in publishing…

David goes to his office every day to work on his book, while Billy is hard at work establishing himself in this fake life.

King really digs down deep into this part of the story.  We meet “David’s” neighbors, and some of the other people who work in the office building, and we basically get to watch a man who’s never known much peace finally get a peek at what a good life might just look like.  Meanwhile, Billy Summers is establishing a second fake life under an alias the mob doesn’t know about because once the hit goes down, Billy’s going to need an escape route.

The mob guy who hires him has a plan already set up to help Billy get out, but this is the mob and Billy doesn’t believe for a second that following that plan will get him anything but shot in the back of the head.

Watching Billy, as David, go about his life, interacting with the people in his cul de sac, playing Monopoly with their kids, hosting a cookout, meeting the people in the office building, taking one of them on a date and sleeping with her, even watching him actually try to write a book—because Billy Summers is positive the laptop they’ve provided him with as part of his cover is being mirrored on the other end—is where King makes us forget we’re reading a novel.

Good God, if I can write prose even half as natural as this at 73, I think I’ll be doing okay.

I was struck during the reading of this book by just how detailed King was writing, and how non-intrusive he made those details seem.  Whole scenes dedicated to how proud he is of the lawn he brought back to life, going to a carnival with his neighbors and their kids, having lunch with a bunch of lawyers who work in his building.  And I know why he did it: Billy is the “hero”, and even though he’s a hired killer, we need to see him doing good and proper things like connecting with kids and mowing his grass, otherwise how can we ever identify with him?

And in any other book, I may see past these tricks and yawn and wish for the good parts.  But King’s not just some dude who, when he hit 70, decided to finally write that book he’s always been dreaming of.  He’s a master.  It’s an old standard he always gets tagged with, but dammit, it’s well-earned.  And if any book was going to prove just how frickin’ good he is at this, BILLY SUMMERS can do it no sweat.

But what about the story?  Better yet, what about the horror?  That’s what he’s known for, it’s what most of us who read him came to him for.  King’s “the master of horror”.  But it’s kind of been a minute since he wrote an all-out HORROR novel.  SLEEPING BEAUTIES with his son Owen in 2017?  THE OUTSIDER in 2018?  Maybe THE INSTITUTE in 2019 but I saw that one as more dark fantasy than horror.  But he’s been leaning more heavily into crime the last decade or so, which is not a genre I care at all about, but when King’s writing it, I can overlook the genre and just enjoy the words.

Which is what I did with BILLY SUMMERS.

More happens—this is a long book—before and after Billy takes that fateful shot, but I won’t spoil the book with more details because in the case of BILLY SUMMERS, the discovery is half the fun.  Suffice it to say you will not predict this book or where it goes, and I enjoyed almost every second of it.

Playing with the structure of what a “novel” is, there were excerpts throughout of the life story Billy is writing in his David Lockridge persona, which I could have done without, but it plays so perfectly into the end of the book that I don’t see how he could have managed without them.  More proof King knows what the hell he’s doing, because those were always my least favorites parts of the reading, but then I got to the end and saw how he managed to make that book part of the actual narrative, a really important part, even, and I suddenly didn’t hate it so much anymore.  Good Christ, this man’s good!

BILLY SUMMERS will catch some readers off-guard initially with its third-person PRESENT tense narration, but that soon fades into the background and all you do is watch the movie play out in your mind’s eye as King intended.

I did miss the horror, I will admit.  And King’s attempt to inject some fell so incredibly flat, I wished someone had advised him to delete it.  It concerns a painting in a small cabin where Billy goes to do some writing, you’ll notice it when you come to it and, no, it has NOTHING to do with the story.  That alone, I could have lived with, but it was such a sad wink and a side-grin to his Constant Readers that we could totally have done without.

That aside, though, I really enjoyed this book.  The plot is simple when you break it down, but the telling is so natural and flows as if it had been there all along, and just needed King to come along and put it on the page.  BILLY SUMMERS is not a horror novel, but it is pretty damned good.