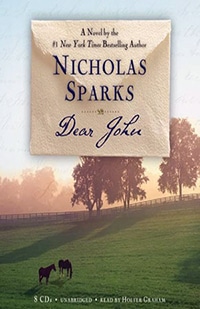 There are some books that draw their magic solely from the alchemy of words. The author takes those everyday metals of the English language, melts them together, and then subjects them to a purifying fire.

Nicholas Sparks in Dear John proves himself to be one such alchemist. The language would appear to be commonplace. The story, told in a heart-breaking first-person narrative isn’t decorative or embellished with Baroque turns of phrase. It’s the story of a soldier who has fought for and found honor and glory in the battlefield of the heart.

John Tyree begins the book by telling us that he ended the relationship he had with Savannah, a woman he clearly and passionately loves. He questions us on what love is and tells us that once Savannah would have said that it was living happily together fulfilling those simple dreams of home and family. John, though, discovers that sometimes love can call for greater sacrifices.

John and Savannah meet while John is home on leave from the army, which has stationed him in Germany. They fall in love and commit to marrying each other once his service ends 16 months later. However, then 9/11 happens and he re-enlists. The constant separation strains their relationship, forcing both into difficult choices.

Nicholas Sparks has an almost mesmerizing way of writing. The narrator brings us close by his very straightforward tale. He never deceives us, but neither does he ever reveal too much. He’s telling us the story years after the events and he infuses the book with a quiet sorrow and muted mourning. It’s an infusion that makes the reader appreciate more fully the intensity of the relationship between the two and the desire both had to make it work while giving the reader the foreknowledge that it won’t. It’s easy to spend the book wondering how this near-perfect relationship could fall apart and makes one constantly hopeful that something will happen to change the despondent ending revealed at the opening chapter.

As a new reader of Nicholas Sparks, I found his characters to be refreshing. They were moral, upright characters who were never overbearing or self-righteous. There was a gentleness in their manner even as they firmly held on to their values. They were also real people with definite flaws who faced real temptations. It was refreshing to have such a lack of cynicism and a worldly innocence.

Another strain of precious metal in this book was the relationship between John and his father. The relationship had grown strained as John was frustrated with his father’s inability to be affectionate or to talk about anything other than his coin collection. It’s a challenging, complex relationship where we see that the father does love the son, but seems unable to express it or to reach out to him. Savannah helps to show John the secret behind his father’s behavior. As John learns more about Asperger’s Syndrome, he comes to understand his father and rebuild a loving relationship.

Nicholas Sparks also manages to avoid politics even while bringing in the events of 9-11 and the military conflict in Iraq. They are merely background to the story and he writes in such a way that people on many spots of the political spectrum could convince themselves that Sparks was in sympathy with their views. Dear John is firmly a love story, not a political novel.

The themes throughout this book are what make it turn from base metals to pure gold. It asks whether love is something that relies purely on one’s selfish participation in it or whether there is something more precious in it that is worth paying for with a broken heart.