The Red Tent is not the book I expected it to be. I brought high expectations to the book as a trusted friend highly recommended it to me. Despite this, the book still managed to take my breath away in manners unforeseen.

More Than A Bible Story

Ostensibly, this is the story of Dinah. It is the story, though, told in a way you never heard it in Sunday School. Indeed, her story is so violent, tragic, and brief, that she is rarely anything but a footnote in most Bible study classes. 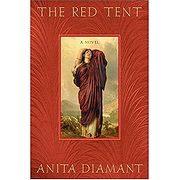 A quick retelling of the story as told in The Bible is useful to understanding this book. Dinah is the daughter of Jacob, only sister to Joseph (he of the coat of many colors). She is raped by a prince whose father then offers to pay a dowry so that his son might wed her. Jacob agrees on the condition that all the men of the town are circumcised according to their family’s tradition. The king agrees. While all the men are still in pain from their circumcision, Jacob’s sons raid the town and slaughter them all.

Dinah then drops out of the Bible and is never heard from again.

The Red Tent tells this story from Dinah’s point of view, and it is the story as we have never heard it before. She begins with the story of her mothers, Jacob’s wives: Leah, Rachel, Zilpah, and Bilhah. She then tells her story.

While the story is the story from Genesis 34, it is different in many important ways. The rape becomes a love affair. Author Anita Diamant explains, “I could never reconcile the story of Genesis 34 with a rape, because the prince does not behave like a rapist! After the prince is said to have “forced” her (a determination made by the brothers, not by Dinah), he falls in love with her, asks his father to get Jacob’s permission to marry her, & then agrees to the extraordinary, even grotesque demand that he and all the men of his community submit to circumcision.”

There is richness about this book that makes any plot summary seem almost superfluous. Yes, this is the story of Dinah. But the events are not what the book is about. The book is about pain, loss, healing, love and its stages, giving birth, searching for identity, and the importance of memory and history.

This is a book of powerful women. The men are shoved aside and intrude only as catalysts in the women’s lives. It isn’t their story. They are loved and cared for, but they have little to contribute to the power of these women.

Diamant takes us into these women’s lives and shows us their power, a power that comes from being women. There is a sisterhood and a motherhood among all the women and both of those two states are sacred. They love the men in their lives, but it is to each other that they turn for fellowship, strength, help, and to seek answers to the mysteries of life.

The book explores how women who are sisters and who share a husband relate to one another. The Biblical account of these women leaves them sounding rather catty and jealous of each other. The Red Tent contradicts none of the facts in the passage, but goes deeper into the spirit of these women and shows them in a fuller, multidimensional manner. We understand the conflicts and how their bond to each other is stronger than most of the conflicts.

Diamant has an incredible ability to make these women strong through their flaws. We love her characters because they are imperfect and because they find strengths in their imperfections.

The tent from which the book draws its name is central to the book both as a physical item in the story and a metaphor that extends beyond the time period covered by the book. The red tent is where the women gather each new moon and dwell in during their monthly flow.

Have you ever noticed how when women live together or spend a lot of time together that their menstrual cycles start to synchronize? Diamant recognizes that phenomenon and all of the women who travel and live together also bleed together-and always at the new moon. This changes later as Dinah moves into other cultures and countries, but for the nomad women, their lives are in tune with the moon and its cycles.

When I first read the regulations that said women had to be banished to a tent for the days of their menstrual cycle, I thought that those regulations were awfully arbitrary and cruel. This book turns that notion upside down. Instead, you see that women are given a time of rest-three days away from their duties and a chance to rejuvenate. They have three days in which they can connect with each other, tell their stories, and share their gifts. It is an empowering time, not a degrading one.

The red tent is the place where women connect, a place where they celebrate their strength, and carry on their traditions. It is a secret world, a world where no man may enter. Even when the tent itself is gone and no one carries on the tradition, there is still a red tent that exists among women when they choose to look for it and turn to each other for strength.

Do Not Get Squeamish Over Our Blood

The Red Tent celebrates the strength of women-not just their hearts and minds, but their bodies as well. A woman’s body and its functions are exalted in this book, in a way that I’ve never read in any other book.

Diamant does not shy away from the messier aspects of a woman’s body. There are no embarrassed blushes or sarcastic comments about a woman’s bleeding or birthing in this book. Both are looked upon as the miracles that make women women.

As Dinah learns of women’s secrets and strengths, so do we. She shares with us the stories her mother told her:

“The great mother whom we call Innana gave a gift to woman that is not known among men, and this is the secret of blood. The flow at the dark of the moon, the healing blood of the moon’s birth-to men, this is flux and distemper, bother and pain. They imagine we suffer and consider themselves lucky. We do not disabuse them.

“In the red tent, the truth is known. In the red tent, where days pass like a gentle stream, as the gift of Innana courses through us, cleansing the body of last month’s death, preparing the body to receive the new month’s life, women give thanks-for repose and restoration, for the knowledge that life comes from between our legs, and that life costs blood.” (p. 158).

How incredibly powerful! Diamant takes what most women look upon as an inconvenience and a bother and instills it with a power and makes it a gift. Women are not victims of their bodies, their bodies are the givers of life and able to endure pain that joy may be created.

In one touching passage, Jacob tells his first wife what his father taught him about the relations of a man and wife: “Isaac, my father, sighed and told me that he had never taken any woman to his bed but my mother, even though she had only given him two sons early in their marriage. Rebecca had welcomed him with tenderness and passion when they first were married because as her groom he treated her as though she were the Queen of Heaven and he her consort. Their coupling was the coupling of the sea and the sky, of the rain and the parched earth. Of night and day, wind and water.

“Their nights were filled with stars and sighs as they played the part of goddess and god. Their touches engendered a thousand dreams. They slept in each other’s arms every night, except when it was her time for the red tent, or when she gave suck to her sons. (p. 33)

Paganism and the Bible

One of the surprises for me in this book was how very pagan it was. Never before have I encountered a book fictionalizing a Biblical story that was so unapologetically pagan. Yet, this was an era before monotheism had taken hold as a dominant religion or philosophy. Jacob, his father Isaac, and his grandfather Abraham were the founders of the faith that would spread monotheism around the world. The women that they married were from polytheistic tribes and they carried their polytheism with them.

Some of the paganism is drawn from the Biblical account. The Bible tells how Rachel took the household gods from her father’s house. This is the teraphim of The Red Tent and Diamant places these teraphim in the context and fills in all the details that the Bible leaves out. She also takes a courageous path and resists the urge to have her characters adopt modern attitudes that would disdain their family’s traditions.

The Red Tent is Diamant’s first work of fiction. She’d written several other non-fiction books (including The New Jewish Wedding, Saying Kiddush, Living a Jewish Life, Choosing a Jewish Life, and How to be a Jewish Parent) and is a frequent contributor to many magazines. She said she wrote this novel because she had just turned 40 and wanted a new career challenge. “Dinah’s silence,” she writes, “inspired me to tell the story from her perspective.”

At the time she wrote this novel, she had a library fellowship at Radcliffe College which let her use the Harvard Library system for her research. She said she focused on the everyday life of women of that period and geographic area. Instead of studying the Bible or rabbinic sources, she concentrated on food, clothing, social organization, architecture, and medicine. She then wove all those elements into the story and used them to create the compelling story of The Red Tent.

Unhesitatingly, I recommend this book

There is a part of me that wishes to recommend this book only to women. After all, Diamant tells our secrets. She takes us into the birthing rooms, she celebrates our menstrual cycles, and reveals the bonds we have with one another. It seems sacrilegious to suggest to a man that he should share in these secrets.

Yet, the red tent is also where women celebrate their love for the men in their lives and how that love creates new generations. This story may not belong to men to tell, but it is a story that is for them as well as for women. For when they, like Jacob, recognize the spirit of the women in their lives, there is joy and prosperity of the soul.

I encourage each of you: Read this story that it may be passed on to you and may go with you as well. Absorb its richness and carry with you forever the echo of Dinah and her mothers and her mother’s mothers.