Agatha Christie’s gothic tales often disappoint me. Endless Night is the most notable exception. The 1967 suspense novel is reputed to be one of Dame Agatha’s favorite books.

The story is tensely told by narrator Michael Rogers , a ne’er-do-well too restless to settle into a job who must tell us of his tragedy. He is not a natural storyteller and sometimes seems to blunder, but his tale is so compelling that readers forgive his inexpertise. His voice is a tribute to Christie’s talent since her own prose is so skillful. 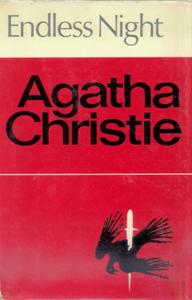 Rogers is a likeable, charming character because of his simplicity and the passion he creates in readers who root for him as he pursues his dream, hoping that he wi’ll get the opportunity to make more of his life than was expected. He meets Ellie, a young, sweet American heiress, and the couple secretly marry and begin building Mike’s dream house after a whirlwind romance.

A Gypsy curse threatens their happiness, and strange things begin happening to them when they move into their house. Evil encroaches on what should be paradise.

Endless Night shares a device with at least one other great Agatha Christie novel, but this story stands alone for its style and tight plot. Nothing is wasted in this novel, and Christie pulls us into a story that challenges us to think about choices, evil, and fate.

While there are Gothic elements to this story, Endless Night is more psychological thriller than Goth-mystery. Mike’s narration compels readers to accept the story as a simple love story as he writes at the beginning. Perhaps part of this novel’s beauty is how it defies easy categorization. Equal parts mystery and love story with a dash of the supernatural, Endless Night is much more than the sum of its parts.

When all is told, it is simply and beautifully a good story. What higher compliment could be paid?

The story draws much of its strength from this perspective. Readers shre the internal dialogue of a man baring his memory. He is searching for consolation, and from the very beginning we understand without knowing all that there is a deep need for consolation after some irretrievable loss.

Christie employs a great deal of symbolism and metaphors in Endless Night. Perhaps the most interesting is her employment of the exotically named architect, Rudolph Santonix. His house designs are different, modern and reflective of their owner in ways the owner could never describe. Rudolph has an uncanny ability to understand people and breathes perspectives. His houses inflict a view upon its occupants who are forced to see things in new ways. Santonix’s genius was in seeing something different whether the subject was a landscape or a human soul.

Endless Night sometimes slips into paranoia, fitting given the trauma that Mike has endured. He suspects, and readers suspect with him, that people around him have a deeper sight that is beyond his understanding. Simple sentences are fraught with layered meanings. Reaers mya ultimately wonder how the story might have been told from another perspective and whether others truly held the knowledge that the narrator suspected them of.

In several key passages, a song is sung with these lyrics:

The title is drawn from these lyrics, and they are an apt theme for the book and the concepts that Christie explores. Yet, it is uncertain whether Christie is making a case for hereditary evil. Rather, she seems to stress that even the most evil among us have opportunities to choose something different.

Endless Night is among the best that Agatha Christie has to offer. The novel isn’t one of her traditional mysteries, but decades later remains is a wonderful example of why her books have outsold everything except The Bible and Shakespeare.