Smarter than a 5th grader…? 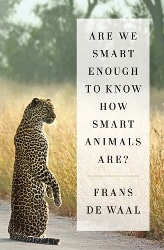 It’s really pretty obvious if you think about it, but every animal has impressive survival skills.  They would have become extinct if they didn’t.  In Are We Smart Enough to Know How Smart Animals Are?, acclaimed author and primatologist Frans de Waal explores how intelligence fits into the survival kit of the many species with which we share the planet.  Can we really figure out what those skills are?  At first glance intelligence may not be detectable to the human observer, particularly if the animal is sitting alone in a zoo enclosure.  But once we really get to know a creature – preferably by watching it in its natural environment – it can become more apparent.  Even then, truly understanding how animals use intelligence to solve the many survival challenges they face each day can be remarkably complicated.  A true test of human intelligence itself. 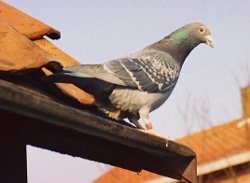 Many animals can do things that humans can’t do.  A kingbird can snatch honeybees out of midair without getting stung.  A sandhill crane can fly from Siberia to New Mexico without getting lost.  An octopus can transform its body to mimic a flounder without getting eaten.  Humans have often viewed these kinds of animal behaviors as interesting but have consistently chosen to overlook the intelligence that they clearly require.  Every time animals – our primate relatives in particular – are noted to do something intelligent, biased humans set out to redefine intelligence.  Since the earliest days of animal observation, humans have bent over backwards to classify clever animal skills as basic instincts, while labeling human behaviors as profound and intelligent. 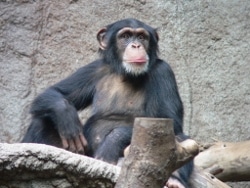 De Waal argues that intelligence is such an advantageous attribute that it’s the pinnacle of arrogance to think that it’s only appeared once, on our tiny twig of the vast evolutionary tree.  From birds to fish to insects to mollusks – and particularly among all kinds of mammals – intelligence has evolved in myriad ways.  But our anthropocentric blinders often make it hard for us to appreciate this, even when it’s right in front of us.

Armed with countless examples, many studies and numerous fascinating anecdotes, de Waal reveals the evidence for animal intelligence.   Often including much of his own research with chimps and bonobos, his discussion is consistently illuminating.  Whether he’s describing how chimps perform better than humans on some computerized number games or exploring how scrub jays clearly make plans for tomorrow and the next day, his elaboration on all types of animal behavior research is remarkably engaging.  While research methodology doesn’t sound like a particularly riveting topic, the author makes it clear that how you set up a study can make all the difference.  Dogs are going to perform poorly on paper and pencil intelligence tests, much like a humans would perform poorly if required to prove their intelligence based entirely on their sense of smell.  If we don’t really understand the animal, we have no hope of assessing its intelligence.

Wide ranging and frequently eye opening, Are We Smart Enough to Know How Smart Animals Are? is an eloquent 270 page argument against anthropocentric hubris by one of the giants in the field.  While the answer to de Waal’s question is still not certain, this overview of how we’ve learned what we do know is thoroughly entertaining.  It’s sure to get you thinking about intelligence in a whole new way.  Highly recommended.

Check out Dave’s review of another de Waal book, The Bonobo and the Atheist.