Why Does the World Exist? 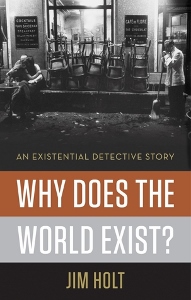 How often do you spend time pondering the big questions?  Personally, I spend more time deciding which violent TV show to watch than I do considering the deep mysteries of reality.  At first glance it may seem like a waste of time to question the actuality of the universe, but I’m happy to report that in the hands of Jim Holt, it’s much more entertaining than you might think.  In Why Does the World Exist?, Holt tells of his journey to discover why there is “Something rather than Nothing”.

People have been trying to explain the existence of the world for thousands of years.  Initially, it made sense to give the credit to God or gods or some sort of external entity who used magical powers to simply create the world and everything in it.  However, with the increasingly sophisticated advance of science over the past 500 years, this explanation has attracted some rather pointed criticism.  After all, if God created the universe, who created him (or her)?

Holt has been a successful essayist for many years, but for reasons that aren’t particularly clear he becomes obsessed with the something versus nothing question, prompting him to seek out some of the finest minds in the fields of philosophy, science, theology, literature and logic.  He visits with crotchety atheist Adolf Grünbaum, religious philosopher Richard Swinburne, computer genius David Deutsch, Nobel winning physicist Steven Weinberg, Canadian philosopher John Leslie, British philosopher Derek Parfit and Pulitzer winning novelist John Updike.  Bouncing around North America – from Pittsburgh to British Columbia to Austin to Ipswich, Massachusetts – he includes frequent trips to Oxford to visit these acclaimed individuals.  He also travels to Paris to ruminate at the Café de Flore, Jean-Paul Sartre’s regular hangout.   Each of these deep thinkers – as well as many others who’ve gone before them, from Socrates to Gödel – adds crucial pieces to the author’s existential puzzle. 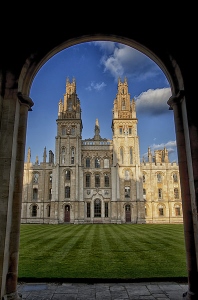 All Souls College at Oxford University as viewed from the Radcliffe Square gate.

While a 300 page discussion of the nature of reality gets pretty convoluted at times, Holt lightens the story with his easy going wit and enthusiasm, turning the book into a rather suspenseful adventure at times.  What I like best is his ability to hold his own with these formidable intellectuals, whether discussing religion, quantum theory, complicated mathematics or the many flavors of philosophy that have developed over the past few millennia.  He doesn’t just transcribe the wise men’s various thoughts, but actually goes toe to toe with them in wide ranging and captivating debates, eventually coming up with his own explanation for the apparent existence of something.

If you like to ponder big questions – whether you give credit to God or believe that the universe is just a cosmically vast quantum hiccup – I can strongly recommend Why Does the World Exist?.  It’s a surprisingly entertaining exploration of the deep mysteries of existence, shedding much light on why we’re here or why it all might simply be an illusion.